For Chung Hwa regulars and Flushing residents, the closing of the 30-year old bookshop meant the demise of a community resource center.

When Chung Hwa bookstore in Flushing closed its doors for the last time in May, many of its regular customers and many residents in the neighborhood felt not just the loss of a bookshop but the demise of a community resource center as well.

“I’ve been coming to Chung Hwa every weekend from my Woodside (Queens) home in the past 20 years,” Mr. Zheng, an immigrant from Hong Kong who migrated to the United States in 1980, said. “I learned English and understood American culture by reading books from Chung Hwa.”

“When I took the naturalization and driving license tests, I went to Chung Hwa to pick up Chinese guidebooks that are sold exclusively there,” Miss Gong, who lives in The Bronx, said.

For her part, Junie Chu said she grew up going to Chung Hwa with her mother. “Every time I go there, I feel I learned a little bit more about my cultural heritage. Coming here makes me feel more connected with my Chinese roots,” said the 24-year-old Flushing resident.

Chung Hwa Bookstore has been a fixture in Flushing since 1986. It emerged as the hub for the Chinese American community not only in in Flushing but those from nearby neighborhoods in Queens. Its popularity is mainly due to its wide collection of Chinese books and its location — along Roosevelt Avenue and just half a block away from the Main Street station of the 7 train line.

But after 30 years of operation, the bookstore was forced to shut down, falling prey to the ever-skyrocketing rent and lease in New York City. Chung Hwa’s manager, Wang Tao Ming, said that the bookstore used to lease the space for $20,000 four or five years ago. “The current monthly lease is $50,000. That’s totally intolerable.”

The closing left a lot of Chung Hwa’s former habitués nostalgic, and reminiscing about the good old days of the bookstore.

Mr. Zheng from Woodside said that back in the day, many patrons would take long bus or subway rides to get to Chung Hwa. The bookstore was always packed with people. On weekends, people came to Flushing to shop for Chinese grocery items, and they would stop by Chung Hwa to pick up the latest issue of their favorite magazines, hang out in the bookstore, chat with other readers or talk about their love of reading with the bookstore’s friendly staff. “It’s a place where most of the people find a second home.” Zheng said.

“In the 90s, there was no Internet. The bookstore and the public library were the main resource center where you can read Chinese books or news. But the library has a very limited collection of Chinese books,” Zheng said, explaining how Chung Hwa became popular within the Chinese American community.

Mr. Zheng recalled how Chung Hwa Bookstore has become the community center in Flushing. “ When it opened in the late 80s, there weren’t too many Chinese in Flushing, “ he said.

Junie Chu’s fond memory of the Chung Hwa stems from the bookstore’s other popular product – stationeries. While her mother reads books on the first floor, she would go to the second floor to browse the Chinese stationeries.

“I like that stationery from Taiwan and Hong Kong. They are stylish and cute. I also like the traditional Chinese stationery, such as calligraphy brush.”

The bookstore has two floors. The first floor of the bookstore housed a large collection of books and magazines. There are stalls where people can sit down and read. Many people came to the bookstore to read the latest books or magazine, but most importantly, to talk about their love of reading or personal anecdotes about being immigrants with the bookstore’s staff.

The bookstore has a decidedly homey atmosphere, where the regular customers can chat up with the staff, even with the manager, Wang Tao Ming, who started out as a clerk and moved up the ladder.

“I’ve known Tao Ming since the first day when the store opened, Mr. Zheng said. “He is a bookworm himself and he is very knowledgeable. He has recommended many good books to me. He is also very attentive. He remembers my reading preference, giving me a call whenever there are new arrivals. Every time I visit the bookstore, we talked about everything, like home politics, immigrant life, parenting experience. We have become close friends through the years.”

On second level, there is a section dedicated to comic books and Chinese stationeries, which was more popular to Chinese American teenagers. The comic book collection ranged from Taiwanese Manhua (Chinese comics) to Japanese Manga (Japanese comic books and graphic novels).

A young immigrant from Taiwan who preferred to be called Triple T, said that he spend most of his after-school life on the second floor of the bookstore reading comics. “I am glad that there is a comic section in the bookstore. If not, I would probably have been involved in street gang activities,” said Triple T, who lives in Flushing and who is now a student at Manhattan Borough Community College.

Another big draw of Chung Hwa Bookstore is the wide array of traditional Chinese stationeries and holiday decorations. The bookstore also sells Chinese zodiac calendars, Feng Shui handbooks, and an abacus that are popular in the Chinese community. Many Chinese immigrants still use Chinese zodiac calendars to this date. The calendar is used to remind people of festival dates, such as the Lunar New Year, as well as auspicious dates such as wedding dates.

Feng Shui is an ancient Chinese belief that calls for harmonizing the energies of the surrounding environment. It is still prevalent within the Chinese American community. Almost every Chinese household keeps a Feng Shui handbook as an important reference at home.

Junie Chu said she used to buy red envelopes from time to time. She said among Chinese, giving red envelopes during the Lunar New Year is a tradition. She finds herself “connected with her Chinese heritage when she shops the red envelopes and gives them to friends or family.”

Some regulars are still hoping that the bookstore will not close shop. “It is rare to see a bookstore like Chung Hwa with such a large selection of Chinese books. I hope Chung Hwa can continue its operation,” said Mr. Deng, a long-time regular of the bookstore.

David Shaw, another longtime Flushing resident and a loyal customer of the bookstore, insisted that it is necessary for the bookstore to remain open. “ I understand the bookstore has a difficult time in maintaining its operation nowadays. But I think it’s necessary to continue to have a Chinese bookstore in Flushing, to enrich the cultural life of first-generation and second-generation immigrants. I will suggest to the owner to consider the cultural significance of a bookstore and set aside the pursuit of profit. Or probably change the management strategy to maintain the business.”

Opened in 1995, China Books and Publication Inc. mainly sells academic books from Mainland China and has probably the least following among the booksellers in Flushing. Xinhua Bookstore, with investment from the Chinese Communist Party, opened in 2008. It only sells simplified Chinese books subject to Community Party censorship.

Flushing has a significant Chinese American population; out of 220,000 residents, about 33,000 are Chinese Americans. The fact that there used to be four bookstores in Flushing shows that there is a strong readership base within the community.

“There is still a strong demand for a bookstore in the Chinese community,” Maggie Zhou, the manager of the World Bookstore said. “A lot of the first-generation Chinese immigrants in the community are used to reading printed books, especially those above 40. Those under 40 may get their information mostly from the Internet, but they still rely on Chinese bookstores when they want to buy books. It is more expensive if they buy books directly from China or Taiwan.

“Because the Chinese immigrant population in Flushing continues to grow, the business of the bookstore will also continue to grow,” Zhou said.

For the many regulars of Chung Hwa, though, the bookstore is like a good book – one that you do not want to end but you know very well that it has come to its final chapter.

Reporter’s Notebook: Flushing
The shorter woman said, "You have such a good insang??!" The other pressed, “But you do go to church, don’t you?” 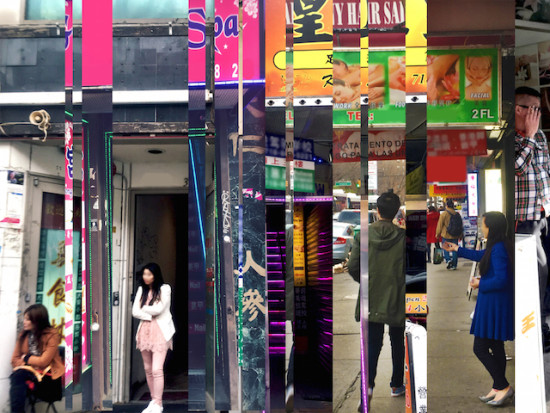 ‘I Am a Sex Worker’
She migrated from China to the United States, hoping to find a better life. She ended up working in a massage parlor, providing sex to customers.

Art Rock City: Looking for a Boulder in Flushing Meadows
It's the second largest park in New York City, and it hosts the U.S. Open. But when the world isn't watching, what lies beneath the park’s borders—and what does it say about Queens?